Our eyes are unique.  No two eyes are exactly the same, even your own eyes are a rough mirror image of each other. Different eyes need different, customised solutions. No single laser platform exists that can provide the solution to all vision problems.

Perth Laser Vision has multiple laser platforms that allow a solution for all vision problems.

Not all problems can be completely fixed with laser treatment alone, but alternatives exist for most.

What is a Femtosecond Laser?

A femtosecond is one quadrillionth of a second (10-15 second).

A Femto-Second (FS) laser is an infrared laser with a wavelength of 1040nm with an ultrashort laser burst (10-15 second). The laser works by producing photo-disruption or photo-ionization of the corneal tissue. Application of a FS laser results in the production of a small gas bubble and this causes in disruption and separation of the tissues. Placing further laser pulses side by side will create a cleavage plane that works like a knife under computer control.

As the Wavelight FS200 laser is directed across the eye by computer control, it creates a microscopic layer of bubbles at a precise depth just beneath the corneal surface.

The flap is then lifted by separating the tissue where the bubbles have formed. This technology represents the accepted standard of care in LASIK worldwide.

With its excellent safety profile and superior visual outcomes, the Femtosecond Method is the safest refractive surgical technique with more than 8 million LASIK procedures performed.

What is an Excimer laser?

The term “laser” originated as an acronym for “Light Amplification by Stimulated Emission of Radiation”.

Excimer laser stands for Excited Dimer. A Dimer is a molecule or molecular complex consisting of two molecules linked together. It is excited by an electric spark.

Argon is an inert gas that is present in the atmosphere. Fluorine is a very reactive gas. In a mixture of the two gases, a molecule of Argon Fluoride (ArF) can be created by a spark but rapidly breaks down again into its original gases and releases light at a specific frequency of 193 nm.

Light that is produced is bounced back and forth between mirrors at the ends of a tube.  The length of the tube is an exact multiple of the wavelength, amplifying the light by summation, and released as a pure laser beam.

The Wavelight EX500 Excimer laser is used during the second step of LASIK or as the sole laser to reshape the surface of the eye to correct the refractive error.

With a multi-dimensional eye tracker keeping a check on the eye position over 1000 times each second, the WaveLight® EX500 Excimer Laser offers exceptional precision and safety:

The Wavelight Topolyzer device measures both the total refractive error and corneal shape of each eye. 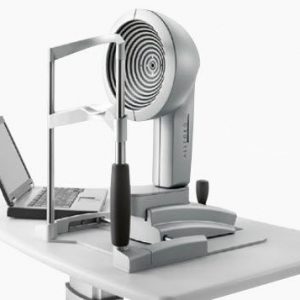 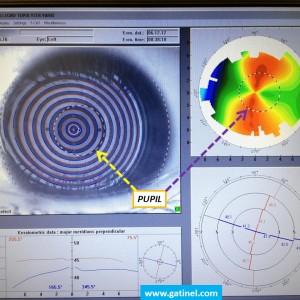 Topography guided treatment (Contoura) is a method that provides a personalised vision solution for each individual laser treatment. The method enhances precision in the treatment of refractive errors. 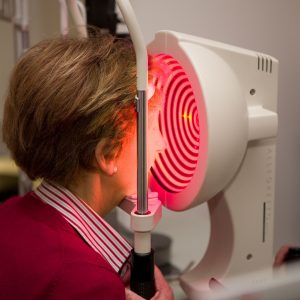 Through combining the diagnostic capabilities of the Oculyzer with the Topoyzer, a unique prescription is calculated and then loaded directly into the Wavelight EX500 Excimer laser using a specialised software system.

This technology, when combined with the laser’s infra-red eye tracker to monitor and follow eye movements, and the flying spot laser beam principle, produces the greatest precision, accuracy and efficiency boosting the results achieved by standard Excimer equipment.

This diagnostic device produces a comprehensive topographic map of both the external and internal surfaces of the cornea, to measure its thickness, elevation and curvature. This instrument measures the refractive wavefront – a small beam of light is directed into the eye, reflects from the retina at the back of the eye, it can measure from multiple specific points externally, the tiniest deviation of the light ray as it exits the eye through the pupil, thus revealing any abnormalities within the entire optical system.