SMILE Laser is an acronym for SMall Incision Lenticule Extraction, also referred to as “keyhole laser eye surgery” is a treatment approved for moderate and high levels of short-sightedness (myopia) only.

It is not currently approved to treat long-sightedness or low levels of short-sightedness, and its treatment of astigmatism is less effective than other treatments.

What is a femtosecond laser?

A femtosecond is one quadrillionth of a second (10-15 second). A Femto-Second (FS) laser is an infrared laser with a wavelength of 1040nm giving a laser pulse of a few femtoseconds duration.

This laser works by producing photo-disruption or photo-ionization of biological tissue.

Application of a FS laser pulse results in the generation of a rapidly expanding cloud of free electrons and ionized molecules (a gas bubble) and this results in disruption of the treated tissue. The ultrashort laser pulse duration of around 100/1,000,000,000,000,000th second, reduces the amount of energy required and limits adjacent tissue damage. This makes FS laser safe for use in corneal surgeries which require exquisite precision.

The laser places pulses side by side in a plane of dissection that links the bubbles to produce a gap in the tissue, a cleavage plane, like a computer controlled knife.

What is SMILE Laser? 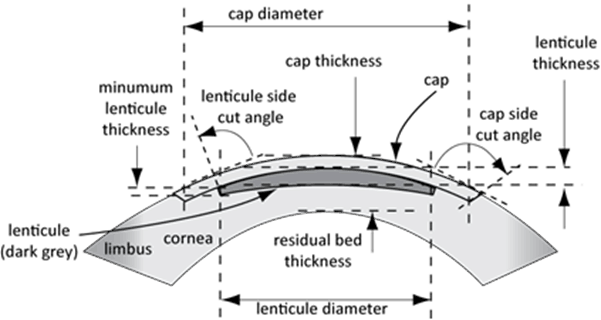 A curved suction cup is placed on the eye, and multiple laser cuts are made, taking around 25 – 30 seconds. There is a minimum thickness that is required at the lenticule edge, and the lenticule must be placed at a certain depth beneath the surface “cap” so it doesn’t tear with the manual manipulation. Typically, this depth is set at 130 micron for the cap plus the edge thickness plus the refractive correction, so the residual (remaining) tissue thickness is less than with other techniques.

How is this any different to other laser treatments?

With PRK, an Excimer laser vapourizes the surface of the cornea directly and is then allowed to heal over several days. This is a tried and proven technique but is slow to heal (several days or weeks, with discomfort and blur) and can scar if too much tissue is removed.

With LASIK a single layer is produced by the femtosecond laser around 95 microns deep. The surface layer is lifted out of position and then an Excimer laser smooths the underlying surface with vaporization of the exposed area with a precise volume and shape for your refractive correction. The flap is then repositioned to mold to the new shape. Healing is rapid (hours) and vision clarity is almost immediate. Scarring is rare.

What are the advantages of SMILE

There are many claims made of the SMILE procedure:

At Perth Laser Vision, we provide a full range of refractive procedures for all eyes, rather than just one or two.  Our primary focus over the last 20 years, has been to achieve the best possible visual outcome for patients.

What is the truth about SMILE? SMILE can only do a standard treatment; basically, what is available in stock contact lenses. It cannot do customised treatments, as we do at Perth Laser Vision, to get the best personalized results.

Visual recovery is slower than with LASIK but faster than PRK. The principal reasons for this are the roughness and irregularity of the treated surface, microfolds in the surface cornea, non-aspheric laser treatment, stretching of the superficial layer of cornea, residual tissue from incomplete removal, and dry eyes. Variable quality of clarity seen through the slit lamp biomicroscope after SMILE, note the rough surface and sharp edge of the lenticule extraction.

One of the most serious complications of any eye surgery is a rare complication called ectasia. In ectasia there is a weakening and stretching in the cornea, sometimes over years, which results in poorer vision.  The principal cause is chronic, persistent eye rubbing after laser eye surgery.

One of the claimed advantages of SMILE is that it leaves a stronger cornea. This claim has not been proven.

Perceptions of SMILE being less invasive and have better safety are not supported.

The main disadvantages of SMILE are:

The SMILE procedure is available at Perth Laser Vision for suitable candidates.